Early weaned and light-weight piglets have some catching up to do. HP 800 Booster from HAMLET PROTEIN is a gentle soy-yeast supplement for piglet feed – developed specially to boost feed intake of challenged piglets for faster, naturally healthy growth.

Increasing litter sizes and the subsequent decline in average birth weights add to greater weaning weight variation which increases the need for a quality feed ingredient that encourages feed intake and supports naturally healthy growth of the smallest piglets. HP 800 Booster from HAMLET PROTEIN has been developed to meet this specific need.

Another feeding trial performed at the University of Arkansas, USA has confirmed that the addition of HP 800 Booster to piglet feed already containing blood plasma improves feed intake. This results in lower costs compared to more complex nursery diets with fishmeal, higher levels of plasma and a higher lactose content.

Blood plasma and fishmeal are widely regarded as the best sources of protein for improving feed intake of weaned piglets.
But their high price is a major drawback. A feeding trial at Leuven University in Belgium put HP 800 Booster to the test as an alternative to blood plasma.

The findings have revealed similar performance and up to 15% feed cost savings when HP 800 Booster is introduced to piglet
diets. By the end of the trial, the piglets were also more uniform in weight. 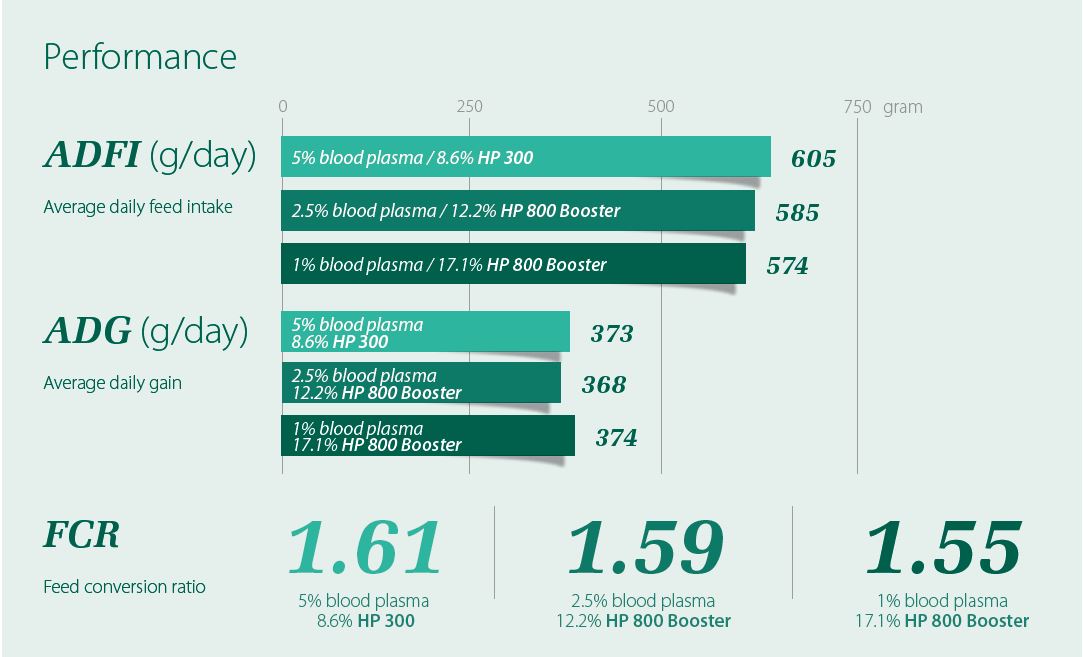 They were then fed the same diet for 23 days.

Although feed intake was slightly lower with the HP 800 Booster diets than with the positive control containing 5% blood
plasma, little difference was recorded in average daily weight gain – evidence that HP 800 Booster has an improved feed
conversion ratio. Weight variance was reduced from 19% with the control to 13.1% and 15.8% with HP 800 Booster 1 and
HP 800 Booster 2 respectively

HP 800 Booster increased feed intake and gave a long-lasting improvement in average daily weight gain in a study of 238
weaned piglets at the University of Arkansas Animal Science Research Farm in the US1).
Even when HP 800 Booster was no longer included in the diet, the study found that piglets fed the supplement at an earlier
stage continued to gain more in weight.

The results show that HP 800 Booster improved feed intake by 7% during the 37-day study compared to the negative control.
At the same time, piglets fed HP 800 Booster weighed 0.9kg more than those fed the moderately complex positive control
diet. Diets containing HP 300 also gave a better performance than the controls. Overall, the study revealed opportunities for
feed cost savings of 16-17% (Based on US prices 04/2013, weighted average phase one and two). 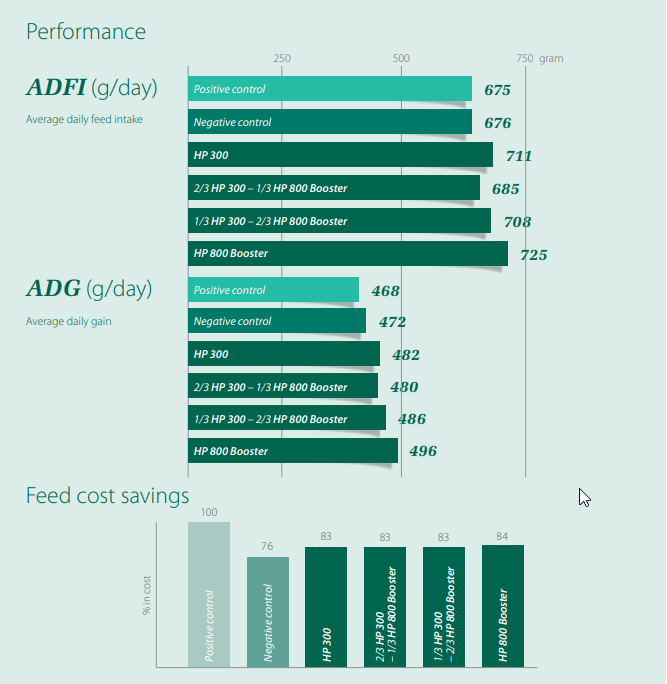 We share our knowledge at conferences and seminars around the world. See where to find us next and who you can meet.

You can also find presentations, videos and other material from previous events.

Ask Lars about this

Feed is the critical factor in animal production, accounting for up to 70% of total costs. Using HAMLET PROTEIN specialty proteins in young animal feed, you can optimize feed efficiency – and maximize your return on investment.

The key is their easy absorption by immature guts. Although added to feed for only a limited period in early life, our proteins have a strong carry-over effect on animal growth and performance. Feeding trials have documented a higher slaughter weight compared to animals fed standard soybean meal.