In previous articles, we have extensively addressed the importance of soybean galacto-oligosaccharides (stachyose and raffinose) in broiler feed (Blanch, 2020, 2021ab). The inclusion of relatively high levels of these oligosaccharides can reduce the productive performance of the birds (Jiang, 2006), in addition to leading to pododermatitis on the farm (Perryman et al., 2013).

These undesirable effects of soy galacto-oligosaccharides are particularly relevant in the starter phase of chickens, since the high amino acid requirements normally lead to high inclusion levels of soybean meal (SBM) in the feed at this early age. In addition, the fermentation capacity of the immature microbiota is not fully developed, so the part of SBM galacto-oligosaccharides that is not fermented will inexorably generate intestinal disorders and consequently pododermatitis, often without identifying the dietary root of these issues.

However, the use of SBM in feed is unavoidable today. The crux of the matter is knowing up to what level of SBM galacto-oligosacchaides we can have in the starter feed without compromising the performance and health of the chicks. This was the objective of a recent study carried out by the Department of Poultry Science at the University of Arkansas in collaboration with Hamlet Protein (Teague et al, 2021).

The effects of soy galacto-oligosaccharides (GOS) raffinose and stachyose

The objective of this study was to investigate the effects of the soy galacto-oligosaccharides (GOS) raffinose and stachyose on performance and health in young broilers (0-21 days). Birds were fed a GOS-devoid diet based on soy protein isolate (SPI) or supplemented with 0.9, 1.8, 2.7, or 3.6% GOS. These GOS levels were chosen to cover the range of levels that we can potentially face in real life. According to Garcia-Rebollar et al (2016), the content of stachyose and raffinose in SBM may range from 5 to 10%. Thus, a starter diet with SBM as the sole source of protein included at a level of 35%, would have a GOS level in the range of 1.75% to 3.5%. Hence, the tested range of GOS (0-3.6%) in the present trial more than covers the levels that we can find in commercial starter diets.

Stachyose and raffinose were maintained at a ratio of 4:1, like what is found in SBM. Each one of these five treatments was administered to 10 replicates of 8 birds. Birds had ad libitum access to feed and water. Body weight (BW) and feed consumption were recorded on 0, 7, 14, and 21d post-hatch for assessment of feed intake (FI), body weight gain (BWG), and feed conversion ratio (FCR). Data were analyzed by one-way ANOVA. Means were deemed significantly different (p<0.05) by Tukey’s multiple comparison test. Linear, quadratic polynomial and quadratic broken-line regressions were used to investigate the dose-response of GOS in diets. 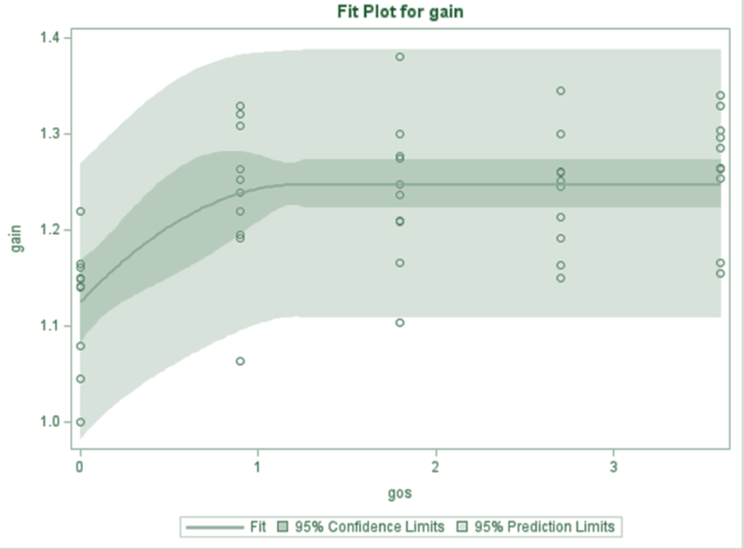 Based on the growth results, it could be interpreted that chickens can use, via fermentation in the caeca and large intestine, galacto-oligosaccharides to a certain extent (up to 1.25% in the diet), generating short-chain fatty acids and consequently energy, which is used for growth. In this sense, low levels of galacto-oligosaccharides could play a role as prebiotics. However, growth is not improved beyond the 1.25% GOS in the diet, suggesting that chickens do not have the capacity to ferment GOS levels exceeding this amount. At levels of 1.8% GOS in the feed, BWG remains the same as at 1.25%, FCR being still not worsened.

Based on the productive performance results of this study, the ideal threshold of GOS in broiler starter diets would be around 1.25-1.8%. Considering previous research showing that a GOS level in the range of 1.75 to 3.5% can be expected in a broiler starter diet with 35% SBM, it is not unlikely that young chickens are fed a GOS level that exceeds the threshold of 1.25-1.8% in the final feed. Consequently, chick performance will suffer. 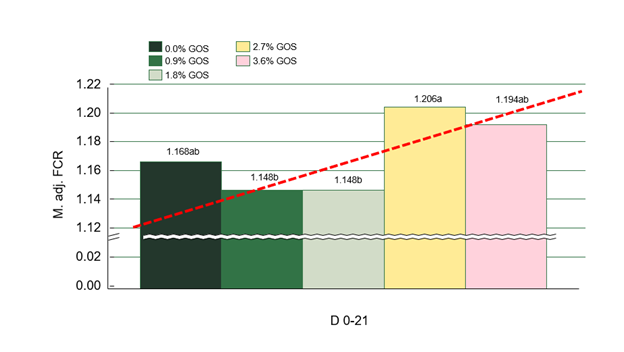 All litterature refferences can be forwarded by request

Ask us about this
﻿

Ask us about this
﻿